Gods don’t mean much until you meet one.  Well, I didn’t exactly meet Molag Bal – I met a creature made of bones that was some sort of aspect of him, and heard an appropriately-deep God-like voice a couple of times, but still.  Gods aren’t normally part of my life, so it was pretty cool.

Turns out I’m dead, but not.  I’ve got no soul, but I’ve still got my body.  Strange part is I still feel the same as I always did.  Long story short, a batshit sorcerer named Mannimarco needs souls to power his nefarious deeds and mine happened to be one of them.  I was walking along the road to Riften and boom—

Mace to the face.

Woke up in Coldharbor, Molag Bal’s realm, and a giant woman with arm muscles the size of my face broke me out immediately.  She had extremely perfect timing.  Met a creepy old blind man with a hood who wouldn’t call me by my real name no matter how many times I said it, some ugly bitches with horns, and a fabulously eccentric man with a pot on his head.  I missed a lot of what they were jabbering on about, concerned as I was with the state of my soul, the wondrousness of being in a God’s realm and the curiosity of having clothes in the afterlife.  Plus they kept wanting me to do things, like kill everything with swords, interrupt spells, destroy Sentinels…it was way too much effort for being dead.

Finally we got the old man busted out and he showed me a play with ghosts about the fate of the world and some King’s necklace, but I like to keep my head down and listening to him seems to entail the exact opposite.  So I nodded dutifully, followed behind him and wondered if that wonderful man with the tin pot hat would be back.

He never showed by the time I left – and it was just me who left. The giant woman sacrificed herself so the old man, the Prophet – I swear I thought she had been saying “profit” for the longest time – could come back with me.  Good on her, I’d never have done it.  I mean, think about it.  These two were very serious about needing to save the world from the asshole who killed me, and they think leaving the Indestructible Woman behind in favor of the Decrepit Old Blind Man is the way to go?  Made me feel better about ditching them, I’ll tell you.

Although I didn’t completely ditch them by choice.  I jumped into the Anchor (yes, that’s with a capital A due to its sheer immensity and power), closed my eyes from the blinding light and –

–woke up in Daggerfall.

In a strange house.

Sure, it was an improvement from Coldharbor, but I had been on my way to Riften…and not to be picky since I had just been saved from a terrible and certainly painful afterlife with the God of Butality…but couldn’t I have landed somewhere a bit closer to Riften?

And Daggerfall is so…religious.  It’s all temples and priests and those pompous Templars with their condescending righteousness.  I wanted Riften – drunken Nords, quaffing beer in a bard-filled hall with enough people to around for no one to notice a few items going missing.

My chosen career path will be slightly more difficult in Daggerfall.  And start here I must, since I’m wearing only the stupidly thin clothes from Coldharbor – you can’t even really call them rags – and have a giant great sword that I don’t know how to use and attracts attention faster than a sober Nord.

No, I will not run to Riften – I will make my first steps here, in Daggefall!  They must have a Thieves Guild.  It’s an international organization, my sister told me so.  I’m counting on it.  I won’t go back to the Imperial City no matter what.  It is not an option.

So with that decided, it’s time to take stock of what I have in this small room into which I was magically – and quite unceremoniously – transported.  It’s small but clean, with a fire on one end and a bed on the other.  A few bookshelves with, as luck – or fate – would have it, Wulfmare’s Guide to Better Thievery.  I read it while munching on the bread and radishes left on the table (To Oblivian with the risks!).  The bread is crusty – the resident must have left long ago.  It strikes me, as I lean back and put my feet up, that this must be a woman’s room.  It’s far too clean to have a male resident, and the bed is too small for more than one person. 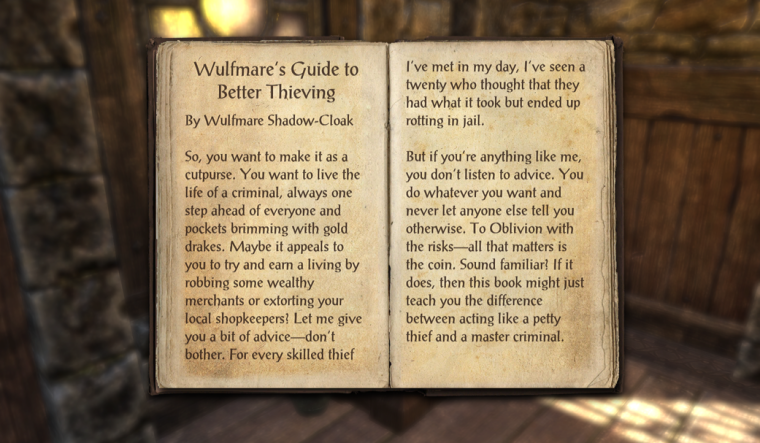 The thought of her returning gets me up and about.  Two cups of tea sit next to the bread, one Jasmine and the other Rose Herbal tea.  I hurriedly down both – neither travels well – and grab a pack left by the bed.  Inside I find a rawhide belt.  I have a thought – why not start my illustrious career right here, in this very room?  I need clothes, and this room has a wardrobe.  I yank it open and discover a worn Jack.  It has the faint hum of magic about it, as though it has a spell cast upon it.  But it’s much more attractive than the tattered Coldharbor shirt, so I swap it out for the midriff-revealing Jack.  The rawhide belt goes atop it, and the empty pack over my shoulder.  Inside the nightstand I find a small cork-stopped glass vial filled with red liquid.  My sister forced me to read more books than I would have liked in the Imperial City, and this liquid I recognized from an introductory Alchemy text – a Health potion.  I put it carefully into the pack.  Also inside the nightstand was a piece of stone, which was either a rustic paperweight or something involved in blacksmithing.   Since the extent of my knowledge on blacksmithing is hitting a piece of something with a hammer, and because of the sheer weight of the damn thing, I left it there.  The third prize was a lockpick – which I obviously kept and put in my pocket  (Funny, that whoever designed Molag Bal’s afterlife ensemble went with pockets.  It seems much too convenient for a freezing hell of a world).  Lastly, I “borrowed” the iron sword leaning up against the fireplace.  The heavy Great Sword just isn’t my thing, and the smaller blade ties nicely to my new Rawhide belt.

Well!  Things are looking up.  Now my biggest concern is shoes.  For some reason running across rocks and dirt freezing as ice yet hot as coals didn’t bother me, but here, in the wood-floored room, I am distinctly aware of it.  Plus, I do not want the people outside thinking me a beggar.  Not going down that path again.  So where to find shoes…someone’s house, a store perhaps…