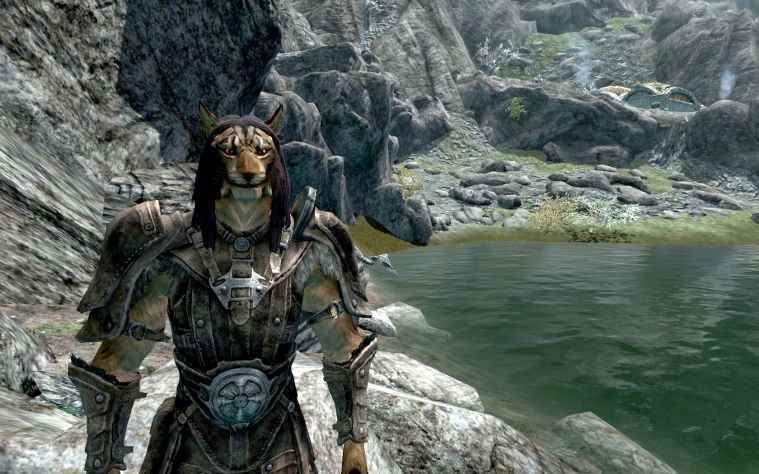 A young, blood-eyed Khajiit brought up under the Unbearable yoke of his father, making his way to the College of Winterhold for the sole purpose of finding his brilliant cousin and proving that he, Dar’Raksadarg, is the true Dragonborn.

History: J’zargo and Dar’Raksadarg are cousins. Their fathers are brothers and both highly competitive with each other. Didn’t matter what it was, their son could always beat out the other, which made the two cousins pawns for the brothers’ war. J’zargo is one year older so he was sent to the College of Winterhold to become the most powerful mage of all. Something Dar’Raksadarg couldn’t do per J’zargo’s father, of course. On Dar’Raksadarg’s 18th birthday, his father approached him with news of dragons attacking Skyrim and that could only mean one thing: the return of the Dragonborn! Those fire eyes of Dar’Raksadarg proves he is the real Dragonborn. So, off to Skyrim he was sent to find J’zargo and proclaim that he was mightier than some college mage. If you have to study your natural-born instincts, then you aren’t really that good. Dar’Raksadarg was born a dragon and he needed no training; he just needs to see J’zargo’s face when he finally learns his cousin, Dar’Raksadarg, is the greatest and most powerful of all.

Skyrim borders are under very watchful eyes, and Dar’Raksadarg was picked up immediately upon entering the outskirts of Falkreath. His story picks up after he is released from the prison. This adventure series is about Dar’Raksadarg working his way to Winterhold to get his cousin, J’zargo, for dragon hunting and unlocking his dragon powers.

Personality: He believes his instincts are superior to all others and foresees being the alpha male in his own clan. His whiskers twitch a lot because he is always trying to sniff things out and not be noticed. He’s a thinker because his cousin J’zargo was always boasting about being better at it. It was important to stay two steps ahead of his cousin, so plotting out moves based on instincts are his key survival tricks. His true name is Dar’Raksa but he added “darg” to the end because it sounded more Orc-like and scary. He always admired the strong warrior tribes, and it’s harder for someone to best an Orc, so he became Dar’Raksadarg.