From the Chronicles of Anankis Miri

By Mishkamist of Entire Party Killed

I just barely escaped from the destruction of Greenest. I know many of my countrymen died, slaughtered by hordes of kobolds, lead by mysterious humans with blue and purple-red dresses, or killed by the fury of a blue dragon that spreads death and destruction on the village.

Even now I can’t explain to myself how I was able to run away: the only thing I know is that there are other people, like me, who want to save the citizens and clear Greenest from this plague that is afflicting their beloved city.

I was running towards the city center looking for guards, when I bumped into two beautiful women: the tallest one was looking at me with hatred, piercing me with her icy eyes but I’m sure I had never saw her before.  Suddenly a group of people ran through the city’s streets, hunted by a group of eight kobolds.

I recognized them immediately.

Kuth, Linan and their three children were running from those evil creatures, wielding makeshift weapons: the entire family was straining to drive away the kobolds but they did not succeed. I ran to them, but wasn’t fast enough to prevent the attack the monsters were launching against them.

One by one they fell to the ground before my eyes: Kuth, his wife and one of their children merely fainted, whereas the other two brothers were knocked to the ground, their heads smashed to pieces by the kobold’s slingshot hits.

In front of me, even before I could recover from the shock, the tall woman, invoking Tyr’s blessing, pierced one of the kobolds with her shining sword and then started to parry the attacks of two other monsters; at the same time the other woman, the most beautiful one, killed two enemies with an enormous fire column.

All of a sudden, from an alley on our right, a man appeared, launching a spell against the creatures: his help was essential during the fight.

As always the voice into my mind incited me to kill, to dismember my enemies: I tried fervently to endure it but, in the end, my diabolic blood gained the upper hand and my mind was flooded by a vengeance desire.

I killed one or two kobolds, I cannot clearly remember: I felt screams and a lot of blood around me and on my skin…. My skin changed like always when my mind is blown by rage: countless burns cover the surface of my entire body and shiny signs appears over them.

In the end we defeated those revolting creatures.

“Miri! Thanks God… We must reach the Fortress! There the guards are gathering the survivors, to protect them. We must go there!” Linan’s voice trembled, broke in sorrow.
During the walk to reach the Fortress we ran up against other kobolds and men dressed in blue: we were able to save two other peasants killing our enemies.

The others who were with me introduced themselves: the tall woman, Shill Dhalled, is a Tyr Paladin. She scares me a lot: she’s always looking at me with furious eyes, like I made something horrible: I know my tiefling nature isn’t accepted by a lot of people but I’m a good girl, I have never hurt anyone and in Greenest everyone loves me. I’m afraid by Shill’s manners.

She asked me: “Who is your God?” and I wasn’t able to answer her properly.
Sincerely I don’t understand clearly what she means talking about ‘God’. A fat, bald man, sitting on a cloud, traveling over our heads? Or a bearded old man who observes all the beings alive to judge them?

Shill’s question upset me a lot: maybe I can ask for answers to the other woman, Lei Windriver, she’s a cleric of Sune and so very beautiful!  Lei’s hair is like molten silver and her eyes shine like glittering gold. I envy her a lot.

I can ask Lei some advice about Gods, maybe about her Goddess, but I’m not sure she’ll accept ‘cause she looks at me with mistrust.

But… Where were we?

Daeron Ossa is the mage and, different from the two women, is really kind with me: he has polite manners and a quiet voice. He asked me if I need a cure for my burns… I really like him! And, sincerely, I saw him casting one or two spells I’m acquainted with so, maybe, he can understand me better than the others.

In the Fortress, Escobert, the dwarf captain of the guards and right-hand man to the governor, thanked us for our help and said the governor wanted to talk us; he lead our group, after a short explanation, to Tarbaw Nightfall, the governor. 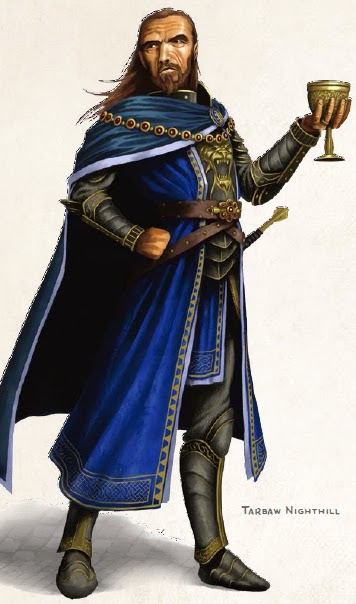 Tarbaw is a 60 years old man with a well-cared beard: now his face is partially covered in bandages and his right harm is bandaged too.

“I must thank you. I observed you from the walls and I must ask you a great favor: Greenest needs all the help it can get and now, here, I’m requesting you to save more people as possible.”

With me he didn’t have to exert a lot of pressure: I would give my life for Greenest and its inhabitants.

After we all agreed, he took us to the parapet on the walls: here we saw a dozen of armed guards, dressed in blue, and, in the center of them, a woman with a purple-red dress. The governor asked us to capture some of those men for interrogation.

Through a secret tunnel we started to leave the Fortress but we were attacked by two swarms of rats: with a little effort finally we killed those beasts and left the tunnel, near a little river. Right away two men, each one followed by two kobolds, were scouring the river with long rods: we killed all the kobolds and captured those men, bringing them, knocked out, in the tunnel.

Now, our expedition can proceed.

One thought on “Anankis Miri from Tyranny of Dragons – 01: The Approach”