Good old nightshade. Poisonous, of course, but it has its uses. You don’t need to sneak up on it either, another benefit of this flower. I’ll just help myself to some of these, then mix them into a drink for J’zargo. A small celebration drink, then I celebrate as he falls dead to the ground. I’ll put an end to this nonsense between our parents. With those flowers in my pockets, I spied a monk on the side of the road. 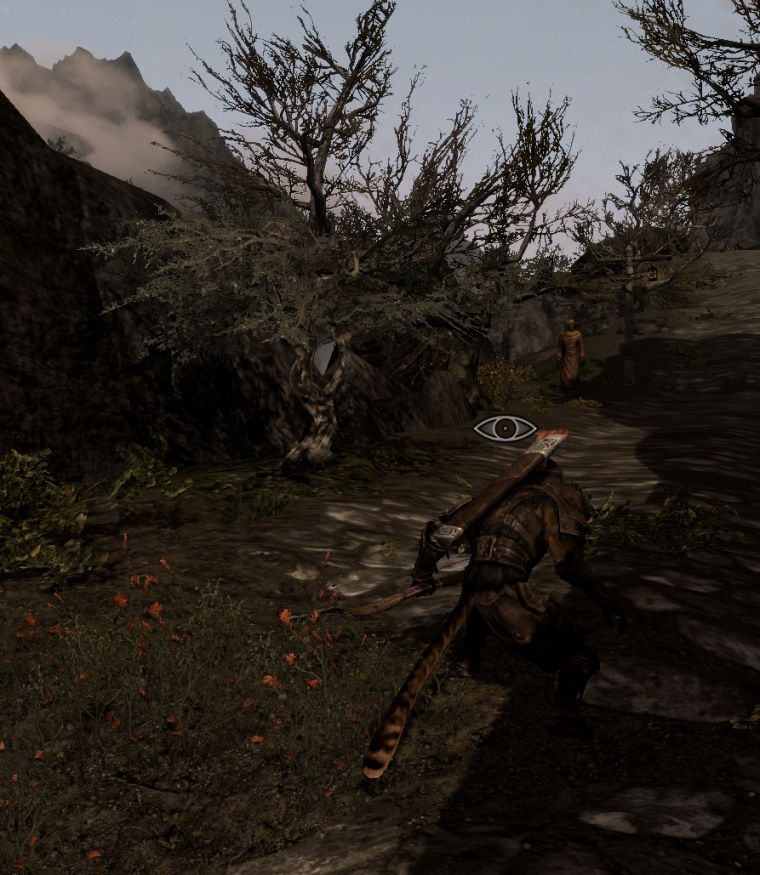 “M’aiq wishes you well,” the old cat greeted me upon my approach. 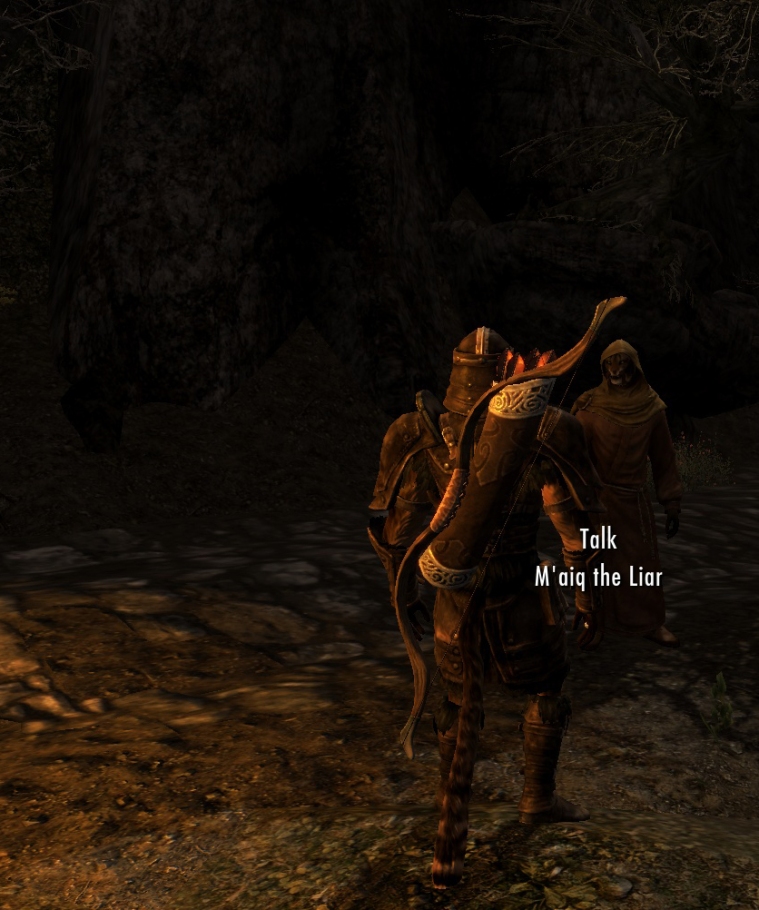 “M’aiq the Lair. Now ain’t this a surprise.” Probably everyone in Tamriel knows about M’aiq since he arrived in Morrowind by some magical force. I always suspected J’zargo was behind it, but M’aiq did appear before we were born.

Perhaps I’ll shove this nightshade down his throat and end his mind-reading crimes. How dare he know about me and that mudcrab, then twist it into some tale about seeing one the other day. He’s no liar, he’s a milk-drinking mind-thought-stealer!

“Something strange happens to Khajiit when they arrive in Skyrim.”

“Let me guess. They think they are powerful mages?” I replied as my eyes rolled in disbelief.

“The people of Skyrim are more open-minded about certain things than people in other places.”

I’m not required to like everyone I meet and that does include fellow Khajiits so M’aiq is moving right into the category. “Your point?”

“How does one know there was a city of Winterhold? M’aiq did not see it with his eyes, did you?”

“That’s it!” I shouted as I lunged for his throat only to find myself face first in the ground and M’aiq the Lair nowhere in sight. I’m adding him to my list, I’ll hunt him down to end his silliness once and for all. Naturally Lajjan can’t be with me because M’aiq might try to influence her over to his side. Some dirty deeds are best done alone. 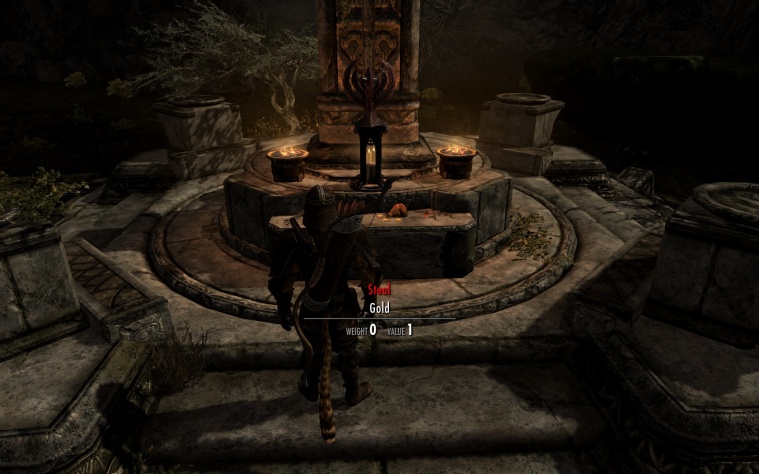 For now I’m back on track for Whiterun and mad about everything not being free for the taking. You would think a shrine would be willing to give away items to the needy because I need that gold piece. This place is frustrating, night is on fast approach and I’m nowhere near this town called Whiterun. 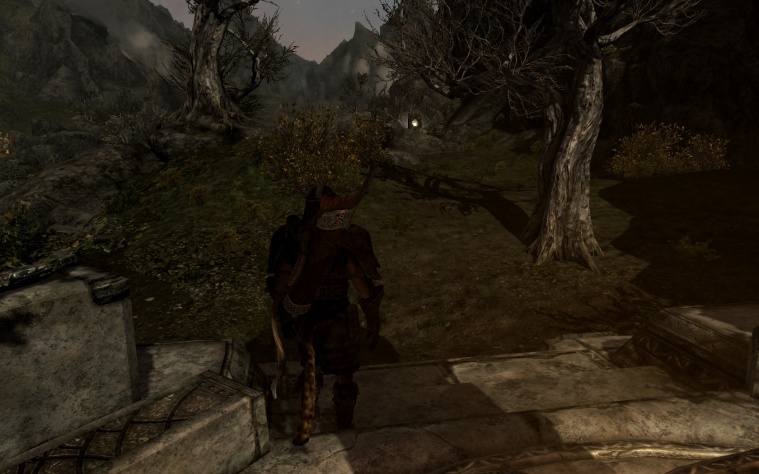 I noticed a light to the left of the shrine. Someone put lights on the Standing Stones! I’m picking the Thief because it never hurts to keep those skills maxed out to become a legendary thief. That’s why I’m the best!

Huh? This isn’t a standing stone. I am curious and suspicious at the same time.

Why is my paw reaching out to touch it? Did I not learn from that lady statue? Look at the colors swirling around my paws and the speed that I pulled my paw back from it. Astonishing.

I feel strange after touching that stone, like I need to run and fast, too. This is a fine mess I got myself into. I’m drunk on speed, hungry as a bear, thirsty as a Nord warrior and tired as a dog.

Nothing I can do about it now except run and whoa….slow down feet!

I was flying down the road and barely missed hitting some wood elf skooma dealer on the road. Luckily his ward spell stopped my approach, and then he refused to sell me anything after learning I was using another source for my skooma. Either way, they are both addicting because I’m going back for that stone again. I was running as fast as the sun was setting.  Now reading those road signs is starting to become tricky without any lanterns nearby.

So I was wrong and that is rare. Wolves do exist in Skyrim. One nearly killed me, which I will only state once. All other versions of the story will be modified to save my pride and prevent ridicule from others. That would have been the worst news ever for my Pa, learning his son was killed by a lone wolf. J’zargo on the other hand would be so happy, and it would be proof right there he was better than me. Well, that wolf is dead and I’m alive so take that, cousin!

I’m glad my Ma taught me restoration skills. Not a master mind you, but I can manage some healing skills in times of need. What I wanted to learn was how to restore stamina and health at the same time. Now that’s power! No more hauling potions along when you only need to toss up some healing magic. Restoration mages are the best, some of the most confident, sweet, unassuming and trustful individuals you could ever meet. Maybe I’ll take the healing courses at the college.

Now isn’t that odd, that mountain has a hole in it! Someone is burning up Skyrim! I need to find shelter soon, it gets tiresome only getting to use my night eye vision for sixty seconds once a day. I believe it should be permanent for Khajiits, a gift for being so intelligent and not some ability considered as a lesser power. Now that would be powerful!

With the fire blazing in the distance I better get moving and try to get closer to Whiterun before complete nightfall arrives.

Another wolf! Two! Good thing I healed up because they look as hungry as I feel. My natural talent and the blessing from the power stone running through me made them no match for my quickness. However, fighting and traveling at night in an unknown land with predators about isn’t always the wisest decision. I will credit myself for thinking ahead about needing shelter so my instincts are truly sharpened. Perhaps a stop in Solitude to request lanterns being built along more of the roads is in order. Even in Riverhold we had Master MannyGT install lanterns in areas that needed them the most. Bet he could do wonders here in Skyrim, it sure is dark here and I have no torch. Always heard about blue torches that are found only in Skyrim, but at this point I would love any color of torch to get some light.

I discovered a dead bandit. For record purposes, I will only state once the truth of what happened. I stumbled over the body because I didn’t see it laying on the ground. 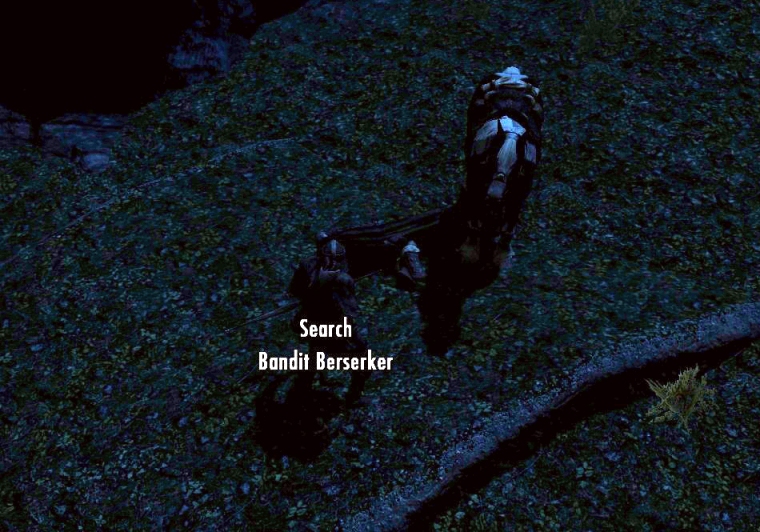 What I saw was a horse in the distance that I was sure belonged to me. It was dark, I wanted a horse, no one was around so the finders-keepers rule applied.

Yes! A free horse and free goodies from the bandit. MILK!! Come to papa! My thirst is about to be fulfilled, all thanks to a dead bandit berserker!

Blast it! Can’t read the road sign, can’t use my night eye while on the horse and I really need to see that sign. What a waste. I need to get to Whiterun quickly for my own sake. So many things I need. Torches, food, drink, camping gear….

With my night-eye vision I can see Whiterun is behind me, still on track.

Wait, where is my horse going? That’s not the way to Whiterun! Come back here! Whiterun is the other way!